Artiklar / Gotland - The island of a hundred churches 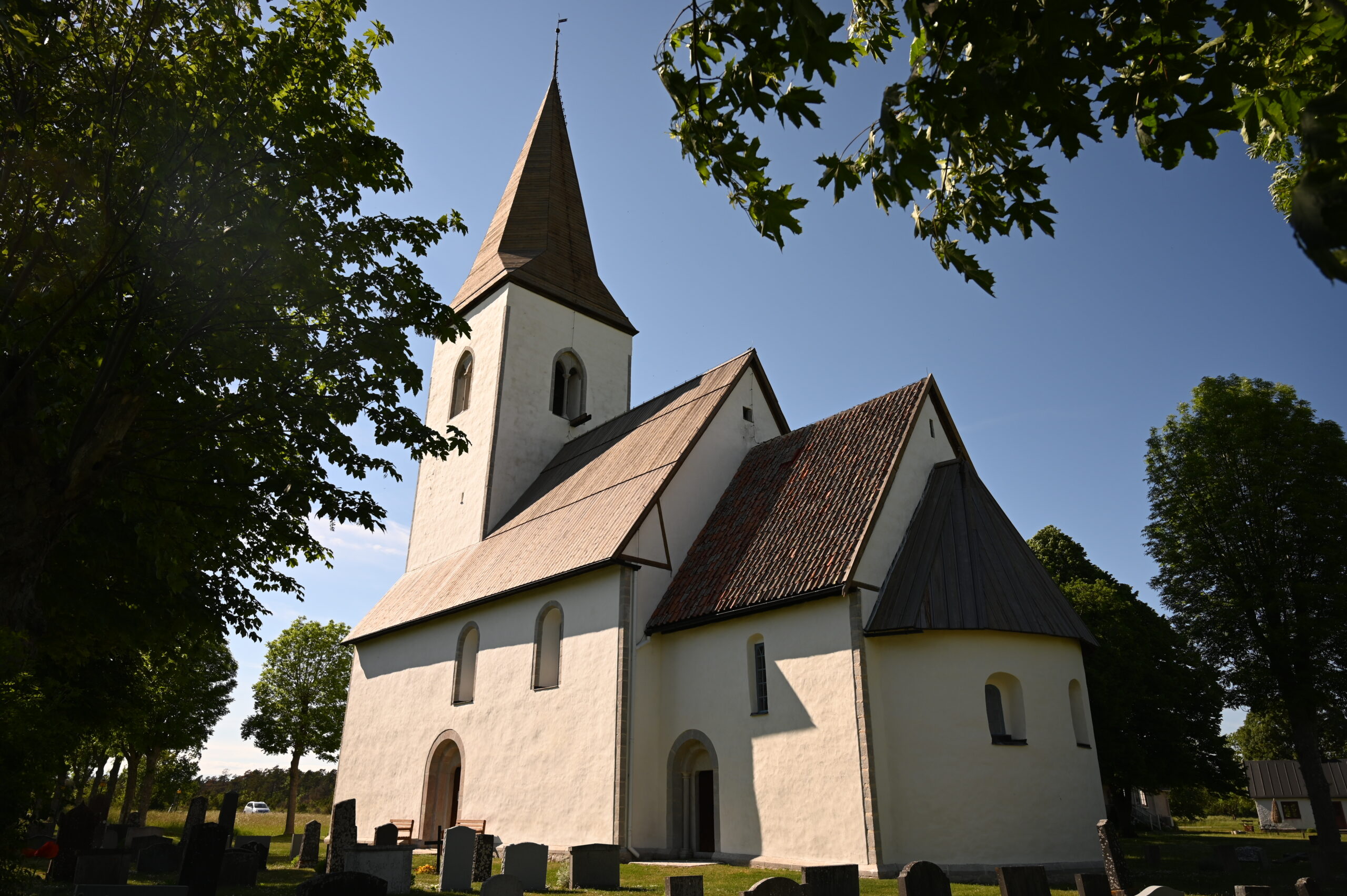 Gotland - The island of a hundred churches

It’s difficult not to notice the churches when you are on Gotland, whether you’re in Visby or the countryside. Churches and their towers make their mark on the surroundings, from the cathedral in Visby to a parish church in the countryside.

It is not for nothing that Gotland is called the island of a hundred churches. We are in a rural countryside where you can see from one church tower to the next most of the time. Churches welcome you to come and take part in a spiritual experience and an art historical treasure. Something that is unusual in Sweden but custom on Gotland is that churches are open during the day from mid-May to mid-September. So next time you pass a church, stop, come inside and let yourself be overwhelmed by its architecture and history. Stepping over the threshold into a church and transporting yourself back to the Middle Ages is a great experience. Gotland has had churches since the end of the 11th century. There are 92 churches on the island that were built before 1350. What a cultural treasure! 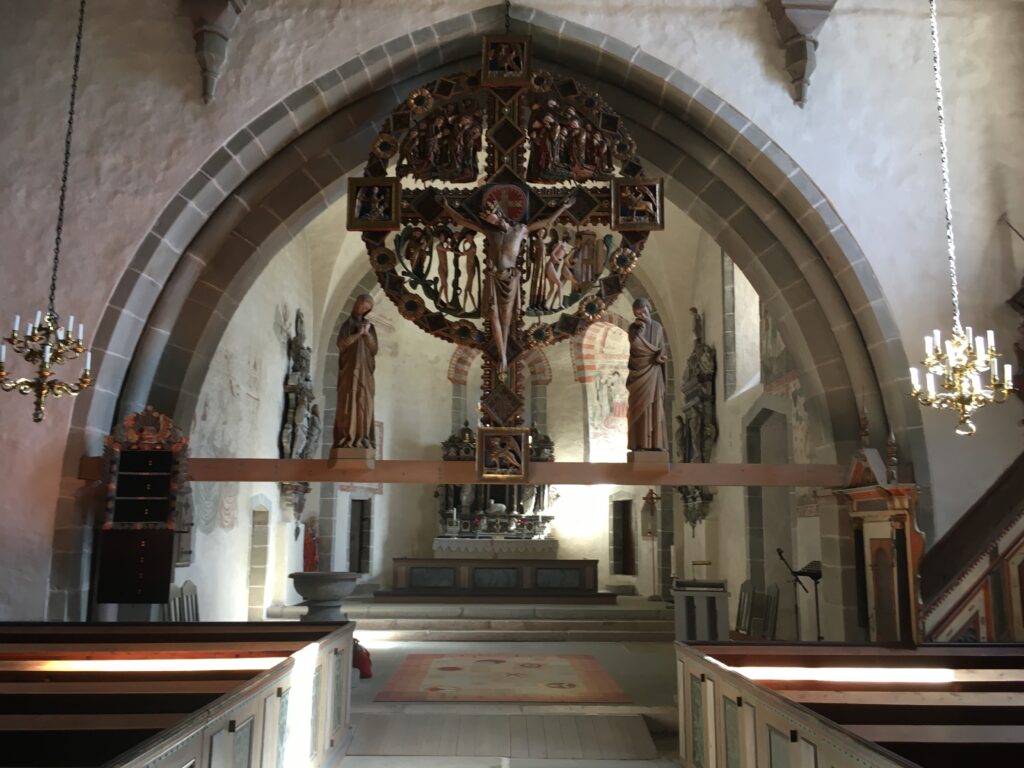 What if the walls could talk? What would these magnificent, 800-year-old walls of our medieval Gotland churches tell us? Maybe they want to tell us about the generation after generation that have come in with their joy, their sorrow, their worries and their questions, large and small. Below these fantastic arches, paintings and decorations, people of the parish have gathered to marry, welcome and baptize their children and say goodbye to loved ones at funerals. People’s whole lives are inside these walls. It’s not just the span of history we feel when we sit in a pew. There’s so much more. It’s many generations of experience of God and spirituality. It’s the feeling of being a link in a chain of people who have sat here through centuries and with wonder in their hearts taken in both the word of the church and its art treasure. Everything from murals and triptych to triumphal crucifixes and experienced an encounter with the divine.

You can read how Gotland became Christian in Gutasagan, written in the early 13th century. Gutasagan is the concluding part of Gutalagen and is written on Gutamål. In Gutasagan you can read about the island’s legal position in relation to Sweden. Its factual parts take up agreements with the king of Sweden about church building on the island and the church connection to Linköping diocese.

This is what the Gutasagan says about how Christianity came to Gotland:

Christianity came to the island in the 11th century, and people started to build the first churches. They built small wooden churches, so-called stave churches, at first. In the 12th century, the wooden churches made room for stone church buildings. These first stone churches were relatively small and dark but rich in images with round-arched Romanesque portals, windows and arches.New ideas prevailed in the 13th century, which is why the first stone churches were completely or partially demolished. The stone material was reused for the new buildings, characterized by open and welcoming portals and rooms and the pointed arch style, the Gothic shapes. Rebuilding carries on until the 14th century, raising towers and extending the nave and chancel. All activities cease around 1350. Gotland’s heyday is over and so is the high prosperity that left its mark on church building on the island. From the beginning, churches, were probably intended to be similar to each other, remain standing, solidified with their differences depending on how far people had come with their rebuilding plans. That’s why the exteriors of churches are similar but still unique on Gotland today. During the 15th and 16th centuries, murals were added to the interiors, such as the picture series about Jesus’ suffering (the Passion friezes). From the 17th century onwards, the churches received new murals, pulpits, altarpieces, bench furnishings, bleachers, organs and number plates.

The church and the care of churches today 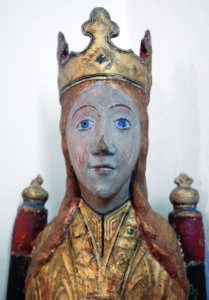 Wooden sculptures and stained glass have been lost down to history and lime murals have been painted over. When renovating churches on Gotland today we try to produce and preserve as much of this cultural treasure as possible. This is a joint responsibility of the Church of Sweden and Visby diocese which has initiated the Gotland Community of churches for this purpose. The cost of caring for churches is borne primarily by members of the Church of Sweden. The churches on Gotland are so much more than a cultural treasure for the people living today. They are a space where parishioners marry, welcome and baptize their children and say goodbye to loved ones at funerals. Not least, worship is celebrated in all Gotland’s churches. As it has for 800 years. Gotland is truly the island of the hundred churches! 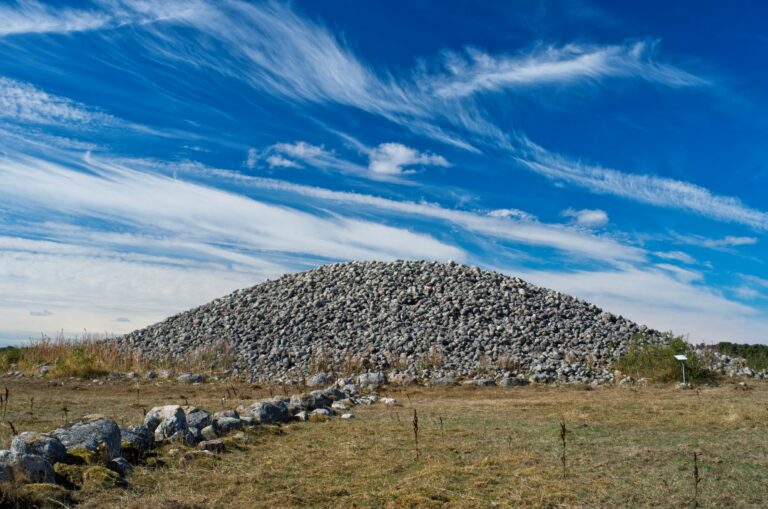 Silver Treasures, Vikings and medieval buildings. Gotland has a long and fascinating history and is the natural link between the past and the present. Many of the finds can be found on either Gotland museum or Bunge Museum, others stand untouched, for you to discover.